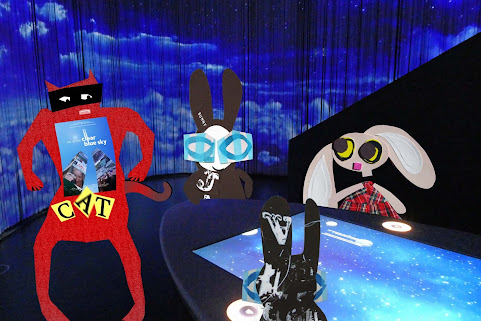 The Wabbit proposed a quite different venue and the team agreed. With any luck someone would bring coffee. Skratch loped down the stairs with a suspicious expression. "What's going on Wabbit? We never meet here." The Wabbit called this the Blue Sky Caffè because he need to do some blue sky thinking. That's what he told Skratch. Skratch wasn't impressed. "Didn't we use to call that Brain Storming?" Lapinette was appalled. "Think of the Brain Storm Caffè. What would it be like?" Wabsworth nodded his head. "That expression changed because it reflected badly on epileptic people." Skratch shrugged. "It never ever crossed my mind." He turned to the Wabbit. "What do you want to blue sky?" The Wabbit drew himself up and spat the problem out. "We need an entirely new publication strategy." Skratch wrinkled his nose. "We discussed that back in 2011." Wabsworth hadn't contributed so he rapped the table. "I for one wasn't part of that." Lapinette laughed. "You hadn't been constructed then." The Wabbit spread his paws wide. "There you are. We need to get everyone on board and read from the same page." Lapinette hooted with laughter. "Black words on white paper?" At this point Skratch decided to play along with the Wabbit. "Our brand is our sign," he purred, "and we have to communicate via codes, myths and archetypes." "That's the spirit Skratch," said the Wabbit. "So what should our publication convey?" asked Wabsworth. "Authenticity," said the Wabbit. Skratch drew his claws along the table and the noise made everyone cover their ears. "Like the last story?" he laughed. "Authentic lies!" smiled the Wabbit.
at March 10, 2021