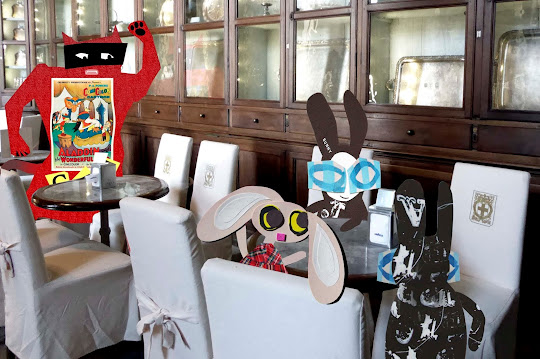 The team met at the Museum Caffè, which was one of their favourites. Skratch was delighted, and he came bursting in with his paw held high. "No need to ask what kind of adventure that was. That was quite a spooky adventure!" Wabsworth began to sit down. "I think I contributed to the overall spookiness," he said with a smirk. When Wabsworth smirked, his circuits became noisy and everyone heard them whirrr. Lapinette stifled a giggle. "I didn't like being in that jug one bit." The Wabbit nodded in agreement. "And I didn't like being the accidental genie and wish granter." Skratch blinked. "That is the customary approach of course. Yet wishes are only some kind of shortcut that avoid the hard practicalities of life." Wabsworth had been reading again. "Yes. Film is all about desire and wanting. Doing is quite another matter." The Wabbit rapped on the table. "Do you know, there are those who would conveniently dismiss our theorising and that is precisely what the adventure is about." Lapinette continued, "It was an aesthetic interpretation of a traumatic event and the exposing of the unanswered questions that underlay it." Skratch meaowed long and hard. "Aha! No theory, no answers," he mused. Lapinette clapped her hands just like a genie. "I summon the drinks and I summon them now." Everyone laughed and laughed, but the Wabbit cut the mirth short. "The unanswered question is - why aren't they here already."
at February 21, 2020