5. Wabsworth and the Rabbit-shaped Cork 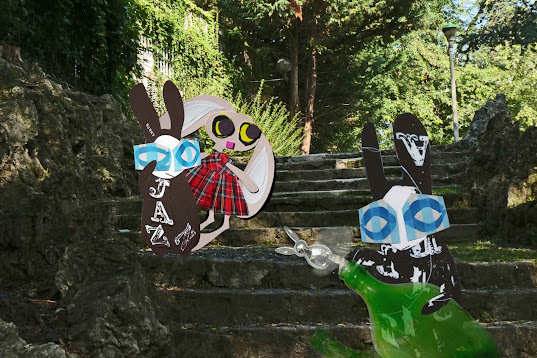 Wabsworth seized the jug while the Wabbit and Lapinette hopped well back and watched from a safe distance. Vapour wisped from the neck - but to no effect. "Good thing I'm an android," grinned Wabsworth. He dug into his fur, produced a cork he'd picked up in a market and slid it neatly into the neck of the jug. The vapour shut off immediately. Everyone sighed with relief. Wabsworth giggled. "I bought this rabbit-shaped cork as a present for you, Wabbit. It was a secret." Lapinette smiled an enormous smile. She knew that in the paws of the Wabbit a wine bottle didn't keep its contents long - so he seldom needed a cork. Wabsworth shook the jug, then shook it again. He held it up to his ear. He heard faint murmuring and detected an angry tone. He shook his head and gave the cork an extra thump. "That'll fix it for now." Lapinette and the Wabbit weren't convinced and the Wabbit glowered. "The plug's in the jug, what next?" Lapinette sighed. "What are we going to do with it now?" "I have a plan," replied Wabsworth. "We can't just leave it anywhere," frowned Lapinette. "Trust me," said Wabsworth. Lapinette pulled rank. "Wabsworth, I insist on knowing where you're going to locate it." "I know an appropriate jugstore," grinned Wabsworth ..
at February 17, 2020