2. The Wabbit and the Fishy Business 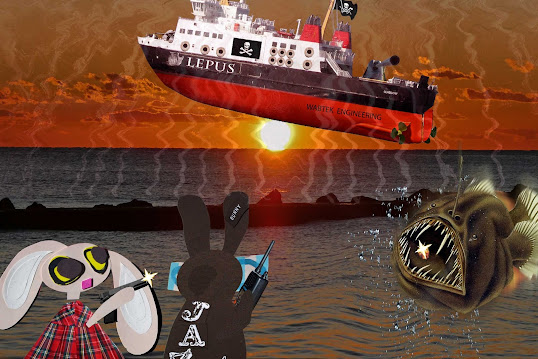 Captain Jenny and the Lepus were early. The Wabbit and Lapinette had been viewing the most wonderful sunset when everything began to shimmer and distort. The Lepus appeared from thin air and came down with the sun. The Wabbit turned to Lapinette. "Emergency protocols!" he yelled and he whipped out his walkie talkie from his fur. "Come in Lepus. This is the Wabbit." The radio crackled with Jenny's voice. "We had some trouble. Watch out!" The Lepus dropped steadily until it hit the water with a dramatic splash. But the splash wasn't on its own and the water threshed and boiled as a sea monster emerged. The Wabbit flinched as a bullet whizzed past his nose. The creature chose that moment to belch like a Kraken. The bullet struck home, and the noxious gases caught fire. The creature turned over, bellowing. Then it sank. Flames decorated the surface and died. The Wabbit sniffed the air. "Oh yuk. Lapinette you singed my nose." He lifted the walkie talkie. "Jenny. Any more of these things with you?" Jenny's voice crackled back. "We disposed of hundreds at one stage, but they kept coming. Then we used your Wabtek device." Lapinette waved her automatic around just in case. "It's an Akwat, isn't it?" The Wabbit scowled. "Dreadful scunners!" Lapinette leaned close to the radio. "Use the Stealthicator, Captain. We'll meet you at the dock." The Lepus seem to vanish with a rumbling sound. But that was just the Wabbit's tummy. "What's for dinner?" he asked. "Fish," said Lapinette.
at February 27, 2020