6. Wabsworth and the Curio Collector 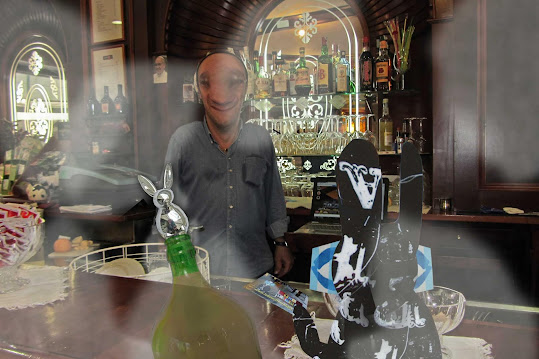 The air in the Curio Bar was thick with incense. Wabsworth's android circuits whirred as he processed it, then he placed the jar on the counter with a lot of care. He'd filled it with sfuso wine from the liquor store in the next street - and capped it with speed. Now vapor made lazy spirals on the surface of the wine. Wabsworth smiled at the figure behind the counter. "Mr Z? You come recommended." The figure grinned. "And so Mr Wabsworth, do you. Is that the merchandise?" Wabsworth nodded and tapped the side of the jar. "On no account should this be opened, Mr Z. And in the unlikely event that it is opened, no-one should drink the wine." Mr Z swayed back and forwards on the balls of his feet. "Aha. It's one of those is it?" He glanced around until he saw a likely spot. He gestured. "I'll put it over there." He lifted it, paused, then placed it on a display shelf. "And now to business. How much do you want for the curio?" Wabsworth frowned. "Technically it's priceless and therefore has no value. But I'd like to pop in from time to time and look at it." Mr Z grinned broadly. "My pleasure." "One more thing," said Wabsworth, "If anyone shows the slightest interest in it, I want to know." He handed him a crumpled business card. Mr Z tucked it in a breast pocket, winked and waved goodbye. "I wish the plan success." Wabsworth turned and winked back. "Be very careful what you wish for around here ..."
[sfuso: unbottled wine from the barrel. Usually moderately priced. Often the customer provides the container.]
at February 19, 2020