1. The Wabbit and the Canal Occurrence 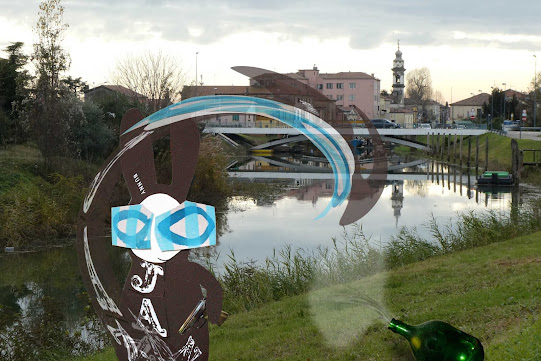 The Wabbit was between adventures, so he boarded a train, got off at random and then hopped around. The area was full of canals so he found a towpath and rambled in a carefree fashion. He agreed with himself that it was a very nice ramble. He paused to take in a picturesque scene and drew a deep breath of satisfaction - but there was something in the air. He could smell grass and damp and a bit of diesel - and something else. He spotted a large wine jug on the grass and he swore to himself it wasn't there before. He heard a suspicious hissing so he felt in his fur for his automatic and pulled it out. Then he felt a bit silly because there was no one around. So he pushed it back in his fur. But there was the hissing again. A faint cloud escaped from the neck of the jug, then stopped. It happened again. The Wabbit grabbed his automatic and turned. The grass shimmered and the ground moved beneath his paws and he staggered slightly. He shook his head because he was dizzy and he didn't know why. "What the Binky?" he mouthed. He heard his own voice and it sounded slurred. The cloud got bigger, then contracted and he felt a violent drag on his fur. He lurched towards the container with limbs like jelly as the jug surrounded him with vapour and pulled him in through the neck. Now all he could see was a world of green. "Welcome," said a voice, "You are my new Genie ..."
at February 06, 2020