8. The Wabbit and the Disorderly Exit 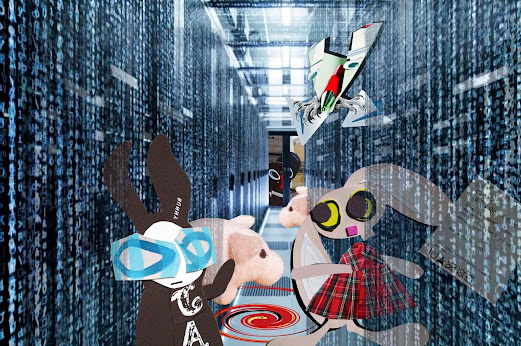 The Wabbit and Lapinette emerged from the super computer. It was hardly an elegant exit but they were glad to get out. The two pink pigs emerged too and they snuffled the corridor with piggy grunts. "Where's Skratch?" asked the Wabbit, "I'm sure I was speaking with Skratch." He heard scratching from the floor and looked down. "I dreamed you out," purred Skratch. And there he was, coiled up on the floor. He was flat as a pancake and stretching. Gradually he fleshed out. First his head, then his tail, and then all his limbs. Finally there was a body. "I've got your notifications," said a voice. It was Flotsy, holding messages in his claws. Lapinette twitched her ears. "I didn't see you." Flotsy laughed. "No-one ever sees me, I'm the Fake Vote, remember?" A violent rapping at the door made them all turn. "I'm locked out!" It was Hardhack Rat. Now the Wabbit's frown turned to an enormous grin and he hopped down the corridor and unlocked the door. "Where's our money?" asked one of the pigs as he passed. "Yeah, where's the dosh?" grunted the other. Flotsy hovered above them. "I took it for services rendered." "Hand it over!" shouted the pigs. "Impounded," fluttered Flotsy, "But I'll write you a promissory note." His ball point pen fluttered back and a forth and a notification floated down. The pigs rolled along the corridor and then they rolled back. They honked, grunted, snorted and squealed. But Flotsy banked and turned. "I'll be back," he shouted. Then in a trice he was gone. "Is a promissory note enforceable?" asked the Wabbit. "It has tax advantages," shrugged Lapinette.
at September 13, 2019