6. The Wabbit and the Quantum Lubricant 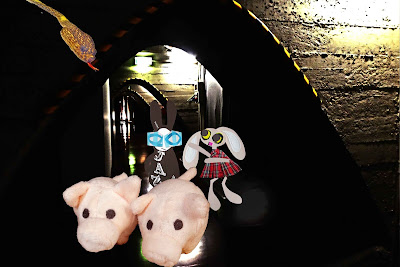 The two pink pigs wanted to lead the way and the Wabbit let them. They grumbled in metallic voices that came straight from an electronics factory in Shanghai. Mostly they grumbled about whose idea it had been in the first place and when they got tired of that, they grumbled about the Wabbit and Lapinette. The tunnel that led from the door was longer than they anticipated and the Wabbit speculated it was some kind of quantum thing. Every time they saw the end of the tunnel it was the start of another tunnel. "It's like a pipeline," said Lapinette. The Wabbit froze and Lapinette noticed. "Another of your stolen script ideas?" "Yes," agreed the Wabbit. He wrinkled his nose. "So we'd better watch out for snakes." Lapinette thought she heard a hiss. "What kind of snakes?" "Fast moving, quantum tunnel snakes," said the Wabbit. "Multi-coloured?" asked Lapinette. "Yes," said the Wabbit. He thought it prudent to offer further explanation. "They snake along pipelines taking everything with them at high speed." The multi-coloured snake wound round and round, hissing. "Keeps still, everyone!" shouted Lapinette. The pigs froze. "I hate snakes," muttered one. "And keep quiet," yelled Lapinette. The snake dropped ahead of them and slithered up the tunnel. The Wabbit, Lapinette and the pigs all picked up speed. The tunnel walls seemed to flash by. "Where do they go?" sighed Lapinette. "They're like lubricant," said the Wabbit. "They'll go anywhere they want." The sides of the tunnel blurred. "Who's they?" asked Lapinette. "A powerful, evil corporation," shrugged the Wabbit.
at September 06, 2019