5. The Wabbit inside the Duvet Computer 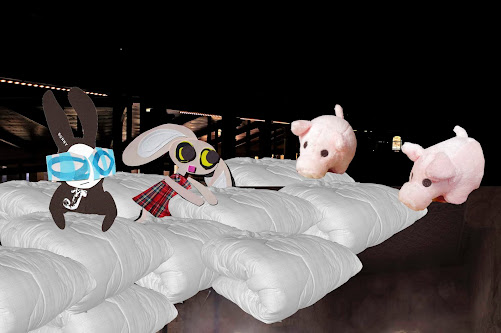 Inside the quantum duvet computer was more than cosy. The Wabbit prodded a duvet with both paws. "What's this supposed to be?" Lapinette poked one too and shrugged. "Software?" Lights flickered to the rear and that seemed normal to the Wabbit. Underneath didn't seem normal. He looked down and pointed. "The cloud," said Lapinette. Only at that point did she see two pink pigs tugging at the duvets. "Who are you?" The first pig made a face and snarled. "Paws up!"  "Stand and deliver," said the other. The Wabbit yelled. "You're another stolen idea!" Lapinette's eyes shot into the roof of her head. "Explain." The Wabbit was really annoyed. "It's one of my film script ideas. Two electronic toy pigs rob a bank!" He was shouting. Lapinette made a face. "How does it end?" "Badly," grimaced the Wabbit. The pigs didn't seem to care. "Answer!" they shouted. The Wabbit huffed and puffed. "I have nothing to deliver. Would a speech do?" "No," said the first pig. But the other pig considered the matter. "Would it be a revolutionary speech, full of fire and brimstone and threats and promises?" "If you want," said the Wabbit. So he began. He quoted Shelley. He quoted Thomas Jefferson. By the time he reached Che Guevara he was running out of steam. "That's enough," said the first pig, "We've already got the money anyway." "So now get us out of here!" said the other. Lapinette waved both paws. "I can see a door up ahead there." "Follow me," snapped the Wabbit as he hopped towards the door.
at September 04, 2019