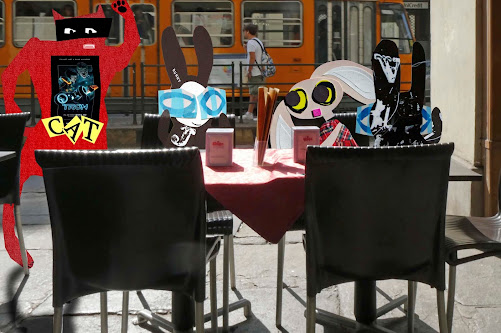 Skratch was really late and everyone was waiting. But a tram clattered to a halt and the doors hissed open. "What was that for a sort of Adventure?" shouted Skratch. He loped from the tram and into the portico - then sat down and flaunted his new t-shirt. "I know we had a computer adventure but what kind?" Wabsworth raised a paw. "Speaking as an android .." The Wabbit groaned. Wabsworth ignored him and continued. ".. I question its dominant specularity. A dreamlike state within a digital world undercuts that kind of traditional indexality." Lapinette smiled. "Perhaps. The interactive potential of spectators as potential digital producers ... suggests control." Skratch purred quietly. "You're saying it challenges the fingerprint of the real?" The Wabbit sniffed and leaned on the table. "Quoting Bazin will get you nowhere. The spectator continues to be a third party. Interactivity is an illusion - yet another set of conventions closely allied to realism." Wabsworth leaned back. "That's all very well, but the adventure blurs subjectivity and renders the world unclear. Is it created from the inside or the outside? We cannot tell." Now Skratch sat up with a start. "In the Adventure, I was outside, then I dreamed myself inside." Wabsworth grinned. "This is the digital age. The dream becomes real and haunts the image like a ghost." The Wabbit rapped a paw on the table. "Then maybe someone could startle us up some drinks." "Mine's an Il Signor Diavolo," breathed Lapinette. "The devil it is!" shouted the Wabbit.
at September 23, 2019