9. The Wabbit and the Dream Manifest 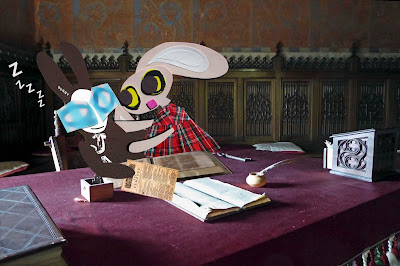 "Wabbit, Wabbit! Wake up!" The Wabbit had been asleep for some time. His eyes were glazed and his mumbling incoherent. Lapinette shook him. He snored heavily. His chuntering at the end of each snore shook the papers on the desk. Lapinette leaned to hear. "Full fathom five, the Wabbit lies." murmured the Wabbit. Lapinette shook him more vigorously. He started to growl. "Be not afeard, the isle of full of robots." He sat up suddenly and looked around but just as quickly lapsed into sleep. Lapinette gave him a vicious dig in the ribs. "Ah woo, hoo," spluttered the Wabbit. His mouth tasted of brine so he scowled and complained. "I'm all pins and needles. It was the icy water." Lapinette folded her paws. "Wabbit! Have you been drinking?" The Wabbit shook his head. "I was rescued from a moving island." "You were snoring," said Lapinette. "Who me?" said the Wabbit, "I never snore." "Yes, you make enormous snores," said Lapinette, "and there's meaning in them." The Wabbit considered for a moment, then lifted the page of the Tempest that had fallen from the tome. Lapinette looked at it and smiled. "So did you find your inner self?" The Wabbit looked rueful and shrugged. "Nearly."
at August 16, 2018