6. The Wabbit and the Premised Tempest 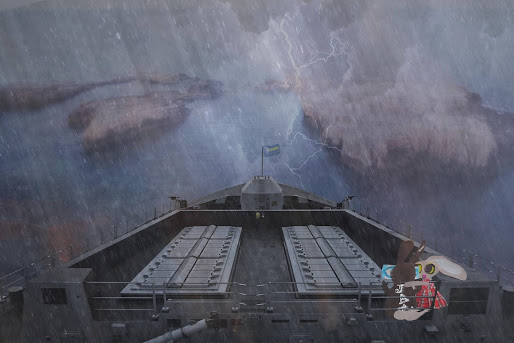 The sea had looked like a mirror but a storm blew in suddenly from the east and lashed the Unut like a thousand whips. The sky grew black. Lightning coursed along the surface and flickered up the hull. The Unut was 10,000 tons and more but the sea tossed it up and down like a cork. The Wabbit strolled calmly along the deck and anchored himself to a rail. Lapinette scurried out and did the same. They peered into the distance. "It's good to mess about with boats," smiled the Wabbit. Lapinette thought of the pedalos in the park. "Adventure in the open air," she gasped. Her stomach lurched but her eyes swept the horizon nonetheless. "What's that?" "Something that shouldn't be there," muttered the Wabbit, "Dead slow." signalled Lapinette. But the Unut was already slowing to a standstill. Three islands shrouded in a soaking mist danced in the sea. "Dead slow ahead," signalled the Wabbit. The Unut moved forward. So did the islands. They're floating," gasped Lapinette. The wind roared and tore at their fur, snatching their voices and returning them mangled. "A plague on this howling," shouted Lapinette." "I've no mind to sink!" yelled the Wabbit, "Full ahead!" The islands pulled away and parted. as the vast bulk of the destroyer tore a path through the perilous waters. The Wabbit grimaced at the sea. "Parting is such sweet sorrow."
at August 08, 2018