7.The Wabbit and the Uncertain Welcome 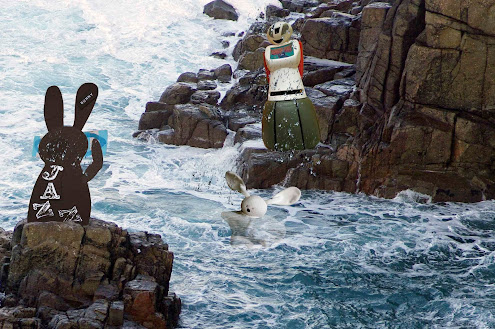 An inner voice told the Wabbit to venture alone to the final island. He hopped from rock to rock across the brine, looking into every crevice, until he heard a voice calling from the cliff. "Hail, Captain of the storm-tossed ship." A ghostly voice sang a mournful tune and a specter wailed its way from the depths. "Hell is empty," it moaned, "and all the devils are here." "You devils look familiar," murmured the Wabbit. Waves smashed against the promontory and soaked the Wabbit's fur. "We take the shape you choose," said a figure on the rocks, "What message do you bring?" The Wabbit thought for a second and then shrugged. "I am the only message." The specter hung in the air and wailed long it set the Wabbit's teeth on edge. "What ails thee, specter?" asked the Wabbit. "Nothing ails me but the lack of it," moaned the specter. It sank beneath the waves only to surface close to the Wabbit. "Who are you?" said the Wabbit. His question was sudden and commanding. The figure on the rocks leaned down until he nearly reached the sea. "We are remnants, deserted and forgotten. We wait to be set free." The Wabbit grinned. "Thou shalt have freedom yet. Freedom is for the taking." "Then take us with you," said the figure. The Wabbit beckoned in welcome - but at that moment, both figure and specter faded until only waves remained.
at August 10, 2018