8. The Wabbit and the Savage Waves 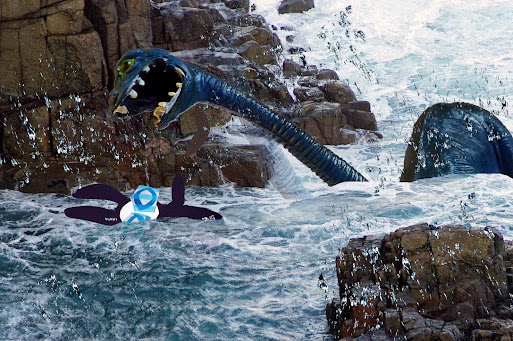 A storm forced the Unut to move away from the island and the Wabbit was cut off. The island was still moving and massive rocks smashed together like gravel in a mixer. The sea rose above the Wabbit's legs. There was only one thing to do. "I have to swim for it," thought the Wabbit. He hadn't a clue where "it" was, but he dived in and started to swim like marsh rabbit. The water was icy and quickly numbed every bone in his body. His brain swam. He began to see a hazy picture of himself on a beach on the Caribbean eating a salad sandwich. The picture cleared and he spotted a waiter dressed as a plesiosaur arriving with beer. The waiter shouted something again and again. He strained to hear it. "Wabbit, Wabbit. Wake up!" Spray hit his head. He blinked water from his eyes and clung onto the waves. "Nessie!" he spluttered. The Wabbit coughed sea from his lungs as he lunged onto a large breaker that rose to meet Nessie's mouth. Now he was hanging by his fur from Nessie's teeth. "Hold yer nose," said Nessie with a muffled voice. The plesiosaur plunge took the Wabbit by surprise. Water rushed past at an alarming rate - then he burst from the surface of calm waters. The Lepus and the Unut floated on a mirror of antique blue. "My ships came in," murmured the Wabbit as he passed out.
at August 14, 2018