3. The Wabbit and the Alphanumerics 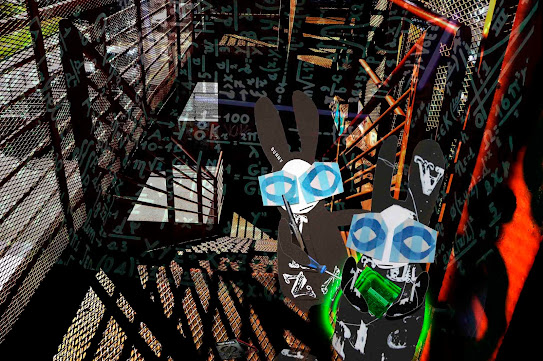 The Wabbit hauled Wabsworth to a discreet location and removed his maintenance panel. A green glow pulsed. The Wabbit tutted, clenched his teeth and produced his favourite screwdriver. He jabbed swiftly at a point just under Wabsworth's shoulder. Wabsworth jerked and his head slumped. Now the Wabbit worked frantically on a concealed keypad hidden in Wabsworth's fur. He turned the screwdriver handle three quarters and murmured, "Sniff 'em out!" It whined like an old fashioned modem. The Wabbit's ears quivered and his eyes narrowed. "Aha!" he yelled. He placed a paw on Wabsworth's head, just under his glasses. He spoke into his radio. "Transmit logic bomb cleaner." He nudged the radio into contact with the screwdriver and waited. Wabsworth suddenly shook his head, sneezing phantom alphanumerics that glistened and died. "Where in the binky was I?" He gasped, convulsed and expelled a series of equations. The Wabbit tried to catch them but to no avail. He scowled. "We were compromised." Wabsworth's circuits whirred. "Did you get an update?" The Wabbit laughed. "I don't get updates. I'm kept completely in the dark." "There was a DWA update," insisted Wabsworth, "it took all binking night." "What did you do?" asked the Wabbit. A silence fell as Wabsworth thought. "There was a movie with it..." The Wabbit's stare was a question. "It was 'Hackers'," groaned Wabsworth.
[A Logic bomb is a piece of malicious software often delivered via the internet, timed to initiate at specific intervals.]
at April 18, 2018