6. The Wabbit and the Shape of Money 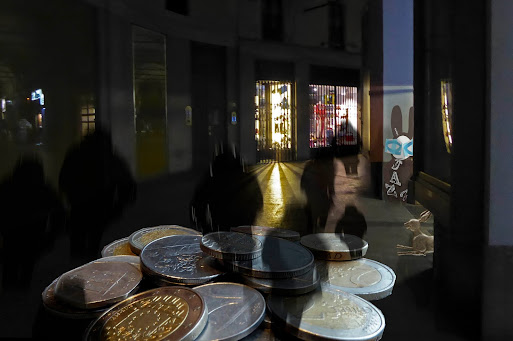 The Wabbit and Spring Rabbit made their way down the gloomy porticos in search of a hiding place for the coins. But the further they went, the heavier and the hotter became the coins. They had no option but to put them down. "Not a great place," murmured the Wabbit. Suddenly the coins moved and clunked in a dull way that froze the Wabbit's bones. It was a slurping slapping noise like chains dragging through oil. The Wabbit drew back behind a pillar and watched as shadows emerged. At first they looked like floating wisps of oily smoke, - but as they grew, they changed into shapes that stepped from between the coins and walked and talked. The shapes spoke of exchange, of buying and selling, of old deals and new deals. Their conversations turned to speculation and profits and accumulation. They argued about power and how to get it. They looked in the shops and laughed and wished them closed so they could make fast cash from the empty site. Spring Rabbit motioned for stillness and that was hard for the Wabbit to do. So he shrank back against the pillar and gritted his teeth. With lightning speed, the shapes wheeled and returned to the heap of coins. An eerie devilish chant echoed along the arches. "Pecuniate obediunt omnia!" They vanished into the coins. Spring Rabbit breathed a long sigh and translated. "All things obey money." The Wabbit snarled. "Obedience is over-rated."
at April 04, 2018