6. The Wabbit and the Lair of the Rat 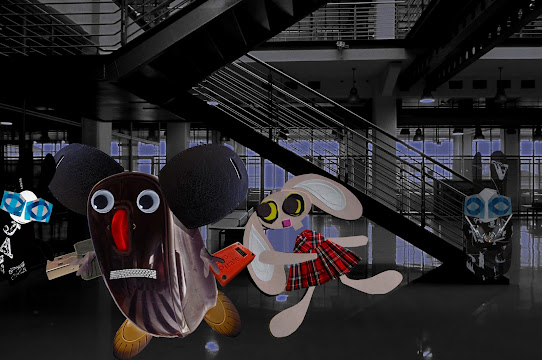 Hardhack became increasingly desperate as his bus pirate was nowhere to be found. Lapinette loped after him. "Professor Rat, Sir. You dropped your bus." She caught up with him and panted. Then she thrust something into his claw. "You dropped your bus, Professor Rat." Hardhack took the red case without looking. His teeth chattered nervously. "Students are no longer permitted in the building." He clutched the bus to his chest. The Wabbit groped in his fur for something he'd bought in a market because it looked technical. "You might be interested in this, Professor." He produced a shiny USB drive and offered it to Hardhack, who snatched it away. "I'll be going now," he snapped. Without a backward glance, he bolted to a stairway and disappeared. "He took the bait," chuckled Wabsworth. "And now the switch," grinned the Wabbit. "Clickedy click," murmured Wabsworth. He pushed two walkie talkies together and made a series of keypad entries. "Streaming," said Wabsworth. From the corridor came sounds of glee. Wabsworth typed on. Now Hardhack's cries were pure joy. "Now I have everything, everything and more!" Lapinette nudged the Wabbit sharply in the ribs. "Everything tastes of porridge""
at April 25, 2018