5. The Wabbit and Hardhack Rat 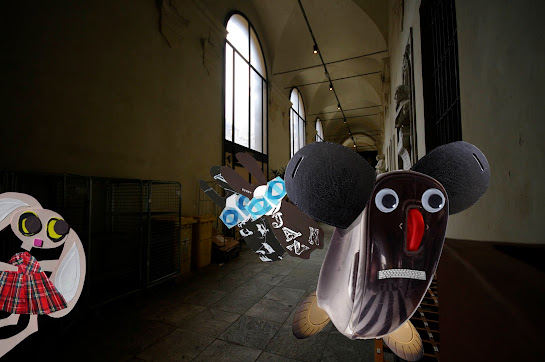 They tracked down Hardhack Rat in an old abandoned technical college, long forgotten on the edge of town. Wabsworth said he might be there, and he was right. There, Hardhack paced dusty corridors in search of something he appeared to have mislaid. "The bus, the bus," he chittered, "where's my bus?" The Wabbit nudged Wabsworth. "If he wants to catch a bus round here, he's won't get a sniff of one." Wabsworth gasped and whispered a stream of technical jargon. "A bus pirate! He's sniffing traffic." The Wabbit scowled. "Our traffic." Suddenly Hardhack's ears twitched. "What was that?" He glanced from side to side. The Wabbit threw his voice and it bounced a whispering bounce from a far wall. "Mice, ice, ice ..." "I hate mice," squealed Hardhack, "but not as much as I hate rabbits." He turned without warning and glared, but the team nestled neatly in the shadows. Hardhack turned back and chittered to himself. "Years at Hacking College and they ask me to fix phones. Now it's payback time." He scuttled down the corridor like Nosferatu. Lapinette drew close to the Wabbit. "Does he sound disgruntled to you?" The Wabbit's laugh was wry and dry. "He was the last winner in the rat race." Lapinette waited until the scuttling died away. She wrinkled her nose and twitched her ears. "Let's find him his bus and give him traffic." "Heavy traffic," hissed the Wabbit.
at April 23, 2018