4. The Wabbit and the Rathole Update 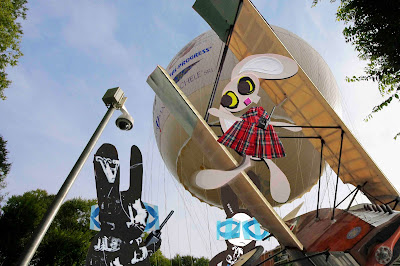 The big balloon made an unexpected take-off and confused everything. Susan the Biplane crash landed, narrowing missing it. The Wabbit pulled out his special screwdriver. "Is everything connected to the Internet now?" he asked. "Not me," said Lapinette. She vaulted down from Susan's wing. "I don't suppose you got an update?" said Wabsworth. "I give updates, not get them," answered Lapinette. The Wabbit prodded Susan with his screwdriver. "Looks like Susan got an update." He prodded again. Nothing. "There was a virus attack," he explained. "Name?" asked Lapinette. "I'm still Wabbit," said the Wabbit. Lapinette sighed. Wabsworth smiled. "Hardhack Rat. That's what we're calling it for now." The Wabbit tapped his screwdriver on the fuselage. "Hardhack sends Logic Bombs via the Internet, timed to initiate at vulnerable points." Wabsworth nodded. His circuits whined while he considered. "And he breaches our protocol parameters without difficulty." "But what's the motive?" asked Lapinette. "These sort of types don't need a motive," replied the Wabbit. Lapinette shook her head. "What types?" "Evil Computers," replied the Wabbit. "They're all evil," said Wabsworth.
at April 20, 2018