7. The Wabbit and the Block Train 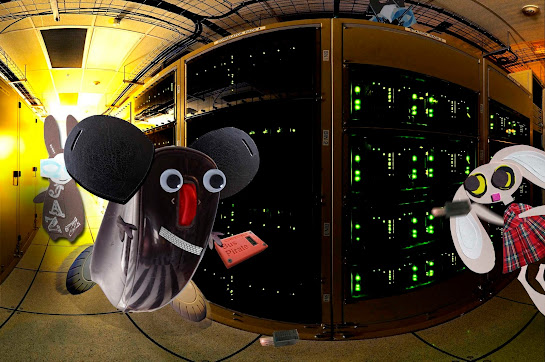 Hardhack Rat wasn't hard to follow. The Wabbit watched him look left to right before opening a concealed corridor door. He gasped. It led to a bunker containing the biggest computer the Wabbit had ever seen. Something glinted in the light and the Wabbit picked it up. Lapinette took it and scurried around the stacks. "Professor Rat, Professor Rat sir, you dropped this." She threw it. The USB fell short and slid along the floor to Hardhack's feet. "I told you, my lady, that students may not enter the facility," snapped Hardhack, seizing the USB. Lapinette put her paws to her face. "Oh, tell me Professor, where does it go?" Hardhack snorted. "It goes here of course." Wabsworth perched on the stacks and waited. There was a snick as Hardhack plugged the USB in a slot on his side. Wabsworth heard it and dialed. The USB flickered. Hardhack froze. Lapinette poked him and yelled, "What is your intent?" Hardhack's eyes glazed. "I forgot." Lapinette looked up. "Wabsworth. Hack off." Wabsworth dialed a series of digits. The USB flashed. "Now start remembering, Hardhack!" shouted Lapinette. Hardhack started to sing. "Oh, the block chain train is a mighty good chain. The block train chain is the train to hack." He just wouldn't stop. "Wabsworth!" yelled Lapinette. Wabsworth chortled, swiped keypads, then frowned. Now Hardhack's singing was frantic. "He's rocking round the block," said the Wabbit.
[Background photo credit: ESO (under the license specified)]
at April 27, 2018