6. The Wabbit and Hostile Mediation 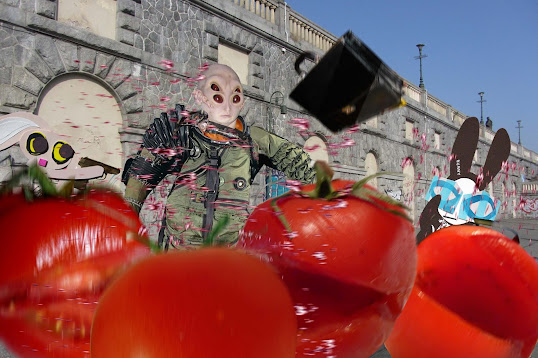 The Wabbit flicked his paws. Suddenly they were on the quay - and tomatoes were going bananas. "Gimme that bag!" growled a tomato. The bag span in the air.  Spray lashed everywhere as tomatoes bumped one into each one. When they bumped, they laughed a menacing laugh and spat. "I'm here to mediate your issue," shouted the Alien Pilot. The tomatoes yelled at him and compared him with a strawberry. The Alien Pilot remained calm. He tried to explain above the din, but failed. So he cut things short. "The strawberries agree to mediation." Tomatoes hooted with mirth. "Bin the strawberries! We are the One True Fruit." The Alien Pilot stamped a foot and shouted at the top of his voice. "We will find common ground with the strawberries. We'll discuss what you both are not.  The tomatoes fell silent for some time. Suddenly there was a suggestion. "We're both not sausages." They erupted into laughter and danced round and round. "I've had enough of this," sighed the Alien Pilot. "Me too," shrugged the Wabbit. Lapinette produced an automatic and pointed it at the biggest tomato. "Cut the cackle or I'll move next business." The Alien Pilot collected his briefcase and extracted a sheet of paper. "You agree to mediation. Sign here, here and here. And down there at the bottom." "Say we don't?" smirked a tomato. "I will find in favour of the strawberries," said the Alien Pilot, "that you are vegetables..."
at June 19, 2017