3. The Wabbit and the Rotten Strawbs 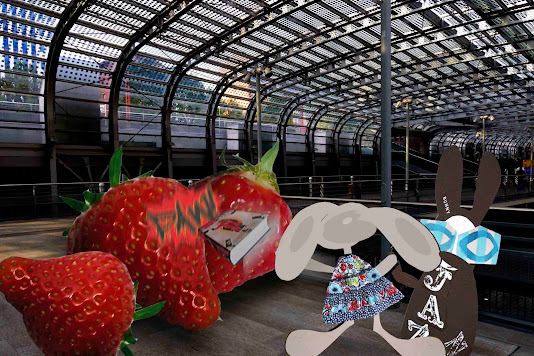 The station looked like a good place to hide - and for a minute it looked like they'd seen the last of burly tomatoes. But Lapinette heard a squelch, and there they were. Three giant strawberries made a sinister sound, like pulp dropping on a runway. Lapinette turned to face them but the Wabbit grabbed her paw and tried to pull her way. "They're too big and too fruity," he yelled. Lapinette stood her ground. "I'm not being run over by fusty fruit." She rummaged in her frock and yanked out the heaviest thing in there. The Wabbit had to smile. It was a sci-fi book he'd picked up in the market and it was weighty in more ways than one. Lapinette launched the book. It scored a direct hit on the biggest strawberry and dented its skin. "I'll dice you for salad!" shouted Lapinette; "I'll make a flan with your flesh!" The strawberries quivered. Then one of them spoke. "Where are the tomatoes?" "They're not real fruit," said another. "They're imposters," said the third. Lapinette waved her paws. "Go away. I've got more books and I'm prepared to use 'em." The strawberries shrank away, but it wasn't from Lapinette. In the distance, the Wabbit could see something coming. "It's the tomatoes and we're in the middle," he yelled. Now the strawberries didn't seem so brave and they backed off. Lapinette turned to face the tomatoes. She glanced sideways at the Wabbit. "Got any hardbacks..?"
at June 12, 2017