10 The Wabbit and the Last Settlement 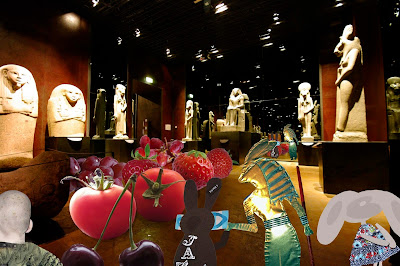 The Wabbit knew one thing. The venue had to impress. So by special arrangement, they gathered for mediation in the Dark Basement of the Goddesses. There was general hush as the strawberries, tomatoes and grapes conversed in whispers. It was like a cocktail party in a church. "I do like cherries," said Unut, the Rabbit Goddess. "Thank goodness for the Romans." chuckled the Wabbit. (Lapinette flinched. The Wabbit's relationship with the Goddess was increasingly informal.) "Oonty," said the Wabbit; "Can you facilitate the cherries to mediate an agreement?" Unut raised her staff and the cherries began to address the gathering. "We bring our vast experience to bear on fruit and fruit-like things." There was a general murmuring. The cherries continued. "Your problem is the seed fixation. Don't worry about seeds." "But we do worry, that's why we're here," said a grape. "And how do you feel?" asked the cherries. "All alone," said the grapes." The cherries smiled politely. "You would not feel all alone, if fruits could only get stoned." "You mean there's another way?" said a tomato. "There's always is," said the cherries; "It depends on how you look at things." "How do you look at things?" asked a strawberry. "We're stoned and were proud," said the cherries.
[The Romans introduced cherries to Egypt. Unut herself is Romano-Egyptian]
at June 28, 2017