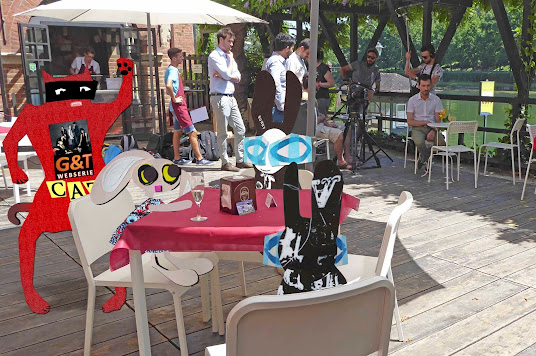 The caffè seemed busier than usual. "What's happening?" asked Lapinette." "I expect Skratch will let us know," said the Wabbit; "And here he comes now." Skratch the Cat made an entrance and he was all smiles. "We're on location with G and T, a famous web series." "Don't they mind?" said Wabsworth. "Special permission," said Skratch. "In that case, Skratch," said the Wabbit; "What kind of adventure did we just have?" Skratch waved to the film crew. "I thought it was a perfect anti narrative. It defied semiosis." Lapinette laughed. "You mean there was no story." "Not at all," said Skratch. "But this world is over textualised and we are constricted by language." The Wabbit laughed and pointed at Lapinette's glass of prosecco. "How did you get that drink?" "I lifted an eye and it arrived shortly thereafter," said Lapinette. "You didn't speak then?" continued the Wabbit. He winked at Wabsworth and sat back. Skratch didn't turn a hair. "Lapinette's sound image was referential. Even though there was no utterance." Wabsworth grinned and agreed. "The waiter did not require an extended semantic field to recognise Lapinette's request." But the Wabbit wasn't fully satisfied. "That doesn't tell us a thing about our last adventure." Skratch patted the Wabbit on the head and told him it had Erzählbarkeit. "That's another story entirely," said the Wabbit.

[We briefly shared a location with the makers of the successful web series G and T.   Erzählbarkeit: German - narrativity]
at June 30, 2017