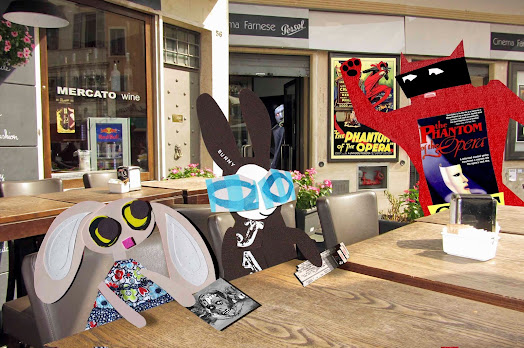 Skratch arrived with a flourish but the Wabbit and Lapinette were ready for him. The Wabbit produced three theatre tickets. Lapinette slid a CD onto the table and patted it. "That's exactly what I was going to say!" exclaimed Skratch. The Wabbit grinned a lop sided grin. Lapinette fluttered her eyes in expectation. Skratch waved a paw. "Your exhibits demonstrate both the isotopy of music and the temporality of audience expectation!" The Wabbit nodded. "But what kind of adventure did I just have?" Skratch leaned back. "It was a thoroughly entertaining one but it demanded a hypothetical competent listener who had expectations about your music and the musical character." Lapinette smiled knowingly. "I once met Eero Tarasti on a radio show." "The semiotic musicologist?" gasped Skratch; "I've tried to get his books but they're always sold out." The Wabbit laughed. "I tried to get tickets for the Phantom of the Opera and it's always sold out." "So what are you holding?" asked Skratch. "Old tickets I got on eBay," said the Wabbit; "They're from 1989." "Give 'em here," said Skratch. He placed them on the table, wet a paw and scrubbed them lightly. Then he traced in new dates with the edge of a nail. "What about seats?" asked Lapinette. "Middle of the front row," purred Skratch; "No one ever sits there." The Wabbit's grin was ear to ear. "You just transcended time and space!" "There's no such thing," meaowed Skratch.
[Here, Eero Tarasti describes his work on musicology and semiotics. The radio programme referred to by Lapinette broadcast on French radio in 1984. Signification musicale led to the establishment of an international community of scholars. Isotopy is a structuralist anthropological term denoting repetition of meaning.]
at June 06, 2017