4. The Wabbit and the Peace Process 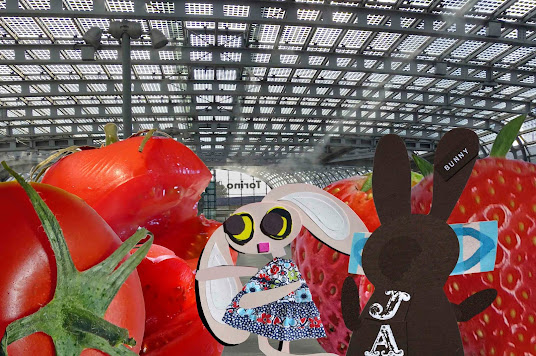 There was only one thing to do and that was to broker a peace. The Wabbit adopted a relaxed position and moved his paws reassuringly. "OK strawberries," he said. "What's the beef with the tomatoes?" Shouting broke out. As far as the Wabbit could tell, strawberries insisted tomatoes were vegetables. Strawberries considered themselves fruits, and were hence superior. "Ah," said the Wabbit. He nodded to indicate he'd heard them but that didn't go down well with the tomatoes. They began to yell at the strawberries, denouncing them as imposters, mountebanks and fraudsters. Lapinette proffered her paws soothingly. "Tell me tomatoes. Why exactly are you angry with strawberries?" A burly tomato pushed his way to the front. "They call themselves berries - but they are not berries. Not by a long chalk." Another tomato quivered with rage. "We have proper seeds. Strawberries are mere accessory fruits." He whined 'accessory' like the spin cycle of a washing machine. "Don't you label us!" yelled a strawberry. The tomatoes and strawberries closed on each other. Bumping occurred. There were bruises and broken skin. "Let's have order," shouted the Wabbit; "and we'll get to the guts of the matter!" Lapinette waved a paw and spoke. "We suggest an independent arbiter." The tomatoes stopped, then one of them smiled slyly. "We want a botanist." The strawberries were outraged. "We insist on a culinary expert." The Wabbit and Lapinette shook their heads. "We have someone else in mind..."
at June 14, 2017