2. The Wabbit and the Dragon's Tale 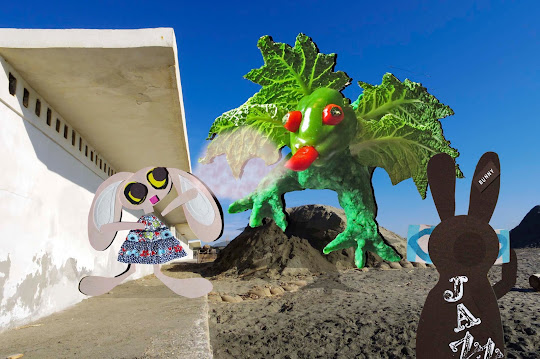 The sky changed quickly - as skies do on the coast. Terni the Food Dragon threw a mound of sand behind him. "This place is never the same." The air hung with a faint smell of cabbage and peppers and mashed potatoes. The Wabbit looked at Terni directly and grinned. "What drags a dragon away from his market?" Terni puffed a ball of smoke. "Trouble of course." The Wabbit breathed a sigh of relief. "Nothing trivial I hope?" Terni breathed fire. "Triple trouble." Wet sand dried in the heat. Paint peeled and fell from the beach hut wall. "It's the talk of the market and the market's cornered," roared Terni. Lapinette waited patiently for an explanation. "Tell us Terni," she breathed. Terni flapped his cabbage wings. "Markets have been cancelled." The Wabbit shoved his paws deep into his fur. Lapinette did the same. "No-one can get a license," roared Terni. Lapinette and the Wabbit looked blank. "Anyway," continued Terni; "The License Department has also been cancelled because no one is applying." "I suppose there are no licenses to issue," nodded the Wabbit. "I don't quite understand," sighed Lapinette; "Why don't they print more licenses? "Terni blasted flame into the air. "Because print contracts were cancelled due to irregularities." "What about the food?" asked the Wabbit. "Cancelled," said Terni. "And the money?" asked Lapinette. "Vanished," roared Terni.
[The story of  Terni's first appearance - The Wabbit and Terni find a device in the market.]
at April 19, 2017