1. The Wabbit and the Limits of Signs 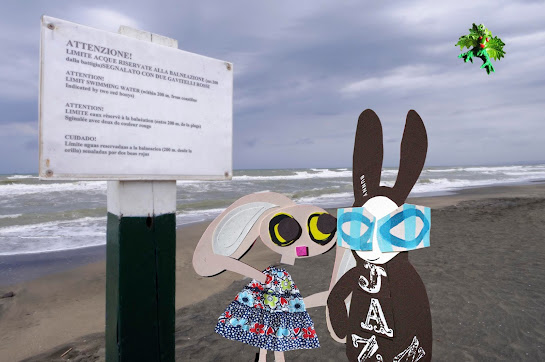 It was a dull day and the beach was deserted. The Wabbit and Lapinette hopped along the sand until they came to a sign. Lapinette looked it up and down and read it twice. "It says we shouldn't do something." murmured the Wabbit. "Not exactly," replied Lapinette; "It says we can do something within limits." The Wabbit scuffled the sand. "In four languages." He shivered in the damp air and thrust a paw into his fur. "It says we can swim between the two red buoys," stated Lapinette. The Wabbit grinned. "Let the two boys swim, it's far too cold for me." Lapinette giggled. They drew patterns in the sand and listened to the waves. "Did you hear a noise?" asked Lapinette suddenly. "Nope," shrugged the Wabbit. Lapinette's ears swivelled. "I hear wings beating." The Wabbit smiled because he knew Terni the Food Dragon was winging his way along the coast. "I hear the sound of our next adventure," he murmured. "He has a tail wind," observed Lapinette; "He'll be here in a minute." The Wabbit squinted at the sign. "What does it say about dragons?" "It doesn't mention dragons," said Lapinette. "Then dragons can do what they like," said the Wabbit. Terni's roar blasted sand along the beach. "All OK?" The Wabbit looked up and yelled. "Within limits." Terni's monster feet hit the beach and he roared, "I go beyond them."
at April 18, 2017