5. The Wabbit and a Backup Generator 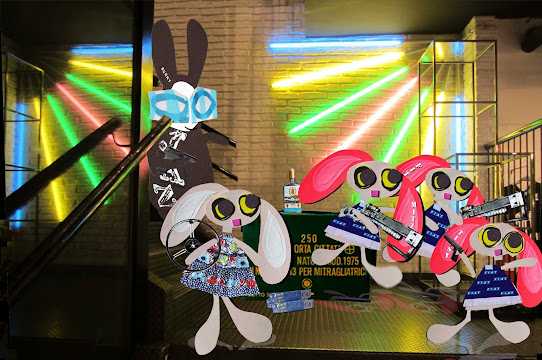 The Wabbit's secret dump was locked and they had to force their way in. Downstairs a commotion raged. "There's definitely something in the store rooms," shouted Tipsy. "I heard a voice," yelled Fitzy. "Let's shoot the shibblet!" shouted Mitzy. The Wabbit listened carefully, then he started to laugh. "Did you disturb my box of old tape recorders? Unless Woody Guthrie came to call." Lapinette's personal guard had a reputation for ferocity and the three brandished their weapons. "He'll never get past us!" Lapinette made reassuring noises. The Wabbit shrugged. "I'd take you all to a caffè but they're closed." The lights flickered, dimmed, went out, then flickered dimly on again. The Wabbit scowled. "Tipsy, can you check the back up generator?" "Woody can check it for me," grinned Tipsy. She disappeared through a door. They heard three curses and a yell, then several bangs, followed by the chatter of a generator. "Let there be light!" shouted Tipsy. Everything brightened.The Wabbit sat on the munitions box. "What the binky is going on?" Fitzy shook her head. "The No people won the election." "I never heard of them," said Lapinette; "What do they advocate?" "Nothing, no thing, not anything" said Tipsy. "No way, no hay," said Fitzy. "Dirty rotten sons of saveloys!" cursed Mitzy. "How will we find them?" asked the Wabbit. "We stop at nothing," replied Lapinette.
[Saveloy: a seasoned sausage, often sold battered in fish and chip shops]
at April 26, 2017