5. The Wabbit interprets the Market 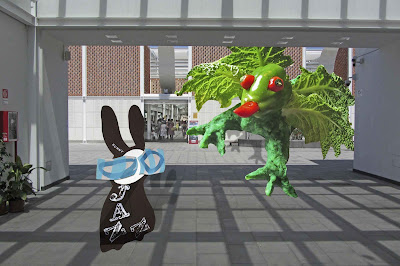 The Wabbit hopped along to the new Testaccio market, not far away. Terni the food dragon spotted him easily and swooped down to join him. They both looked around and at first glance, the Wabbit knew it wasn’t as bad as he had expected. But the Wabbit had a clear idea of what a market should be like. He felt the new building was far too regimented and not very exciting. He wanted to scruff it up a bit and rummage around. There were no old records or magazines and everything was so spotless it seemed sterile. The dragon watched the Wabbit quietly shake his head for some time and saw his ears flap up and down. Finally the Wabbit spoke. "Markets," quoted the Wabbit, "should be medieval in character and have limpidity." The dragon fluttered his wings. "What’s limpidity?" he asked. "Unambiguous. Transparent. Clear and easy to understand," said the Wabbit. "Like me," said the dragon. "Dragons are limpid by nature," said the Wabbit. "Not like you then, Wabbit?" stated the dragon, "Regretfully no," said the Wabbit. "No offence," said Terni the dragon. "None taken," said the Wabbit and he paused to consider the matter of markets. Suddenly an idea flashed into the Wabbit’s head and he smiled broadly at Terni. "What about a transfer?" "To a new market?" asked Terni. "Exactly!" said the Wabbit. "Will there be a transfer fee?" shrieked Terni with delight. "We’ll negotiate something," said the Wabbit. "15 kilograms of cabbage," said Terni. "Anything else?" grinned the Wabbit. Terni folded his wings back, thought deeply, then made his decision. "I want a barrel of beer." "Now, that’s limpid!" yelled the Wabbit.
at September 15, 2012