4. The Wabbit and the Rural Route 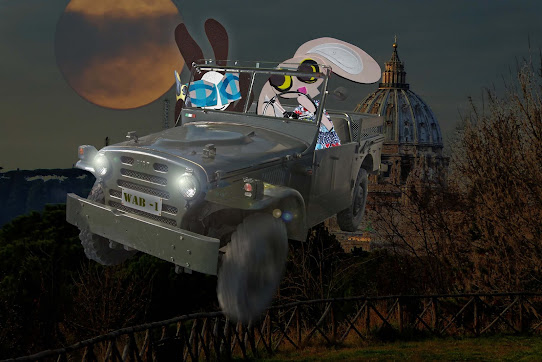 Lapinette sped through the night - taking a variety of routes suggested by the Wabbit.  The Wabbit's knowledge of parks in Rome was idiosyncratic and his routes inventive. His teeth chattered as Lapinette bounced along a rough footpath and climbed a steep hill. The jeep shot into the air as she crested it. "Yow!" gasped the Wabbit. "You said to go to Aurelia this way," shouted Lapinette. Gears crashed and wheels span. The jeep slammed on the lower slope and shot through the woods. The Wabbit remembered that Lapinette trained in the Panzer Division and knew how to treat a gearbox. So he held on tight and flicked a switch on his radio. It crackled aimlessly. "Nothing doing," scowled the Wabbit and he struck it with a paw. It whined and gurgled, then Tipsy spoke. She was barely audible but the Wabbit could decipher some of her more colourful expressions. He hit the radio again. It crackled optimistically. Then it died. "Batteries," cursed the Wabbit. "There's parks all the way?" enquired Lapinette. "For the most part," said the Wabbit. Lapinette gritted her teeth and stamped on the throttle. "We have a small diversion through a convent," said the Wabbit. "After that there's a market garden, a seminary, a playing field..." The Wabbit's eyes narrowed. "Plus a bit of rough ground, nobody knows what it's for." "Then?" asked Lapinette. The Wabbit shrugged. "Then we'll use the flower beds..."
at April 24, 2017