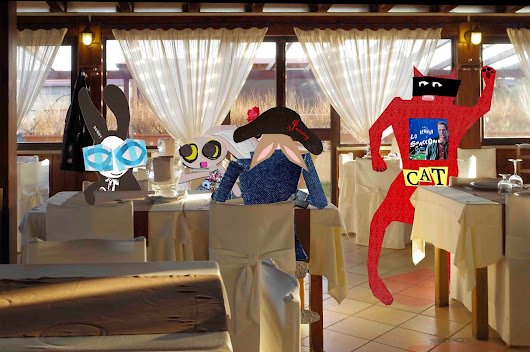 Fregene was a long, long way from the seven planets, but somehow not so far. The Lepus berthed at Civitavecchia and they made their way along the coast. The Wabbit was in search of a particular caffè and he was relieved to find it. "Sometimes, it's not here." Lapinette took a seat. "Isn't this the place where Pasolini met his chums?" "No-one's really sure," purred a voice. Skratch the Cat always lagged behind to make a dramatic entrance and this was no exception. "So tell us, Skratch," said the Wabbit; "What was that for a sort of adventure?" "No-one's really sure," smiled Skratch. Captain Jenny chuckled. "You're implying uncertainty was the structurating principle." Skratch looked at Jenny with awestruck eyes. "Oh Jenny it was. It was a unifying uncertainty that rendered the text open." The Wabbit tapped lightly on the table. "Then we encouraged distantiation and specularity at the same time. Where's our drinks?" An almost imperceptible movement of Lapinette's ears brought immediate service. "How do you do that?" asked the Wabbit. He wiggled his ears, but they looked ridiculous to no effect. Skratch turned his ears back to front and made a face. A waiter arrived. Jenny crossed her ears at the back. The waiter left. The Wabbit's tummy rumbled for a very long time. A waiter arrived. "Got it!" cheered the Wabbit.
at April 12, 2017