6. The Wabbit and the Phantom Call 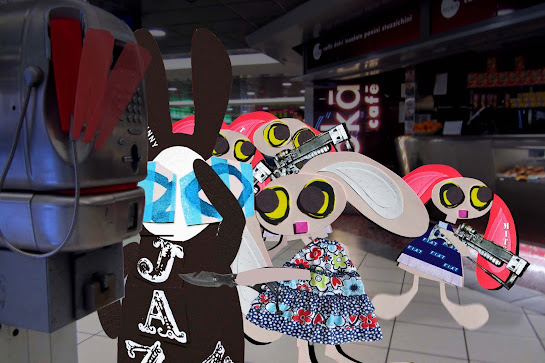 They searched the deserted city for supplies and found some curling sandwiches in the station bar. Fitzy located a jar of pesto. Lapinette spread it equally around with an edged weapon she pulled from her frock. "Maybe everyone in the city shot through," said the Wabbit. "Like Spartacus," said Lapinette. "Did Spartacus shoot through?" asked the Wabbit in astonishment. Lapinette smiled. "Apparently." She handed the Wabbit her knife. "What? He just upped and left," muttered the Wabbit. The telephone rang. "Maybe it's Spartacus!" said the Wabbit. The phone rang again wildly and jumped off the hook. The Wabbit caught it. "Is that Spartacus?" "No way," said a voice. The Wabbit thought for a second and played with the telephone cord. "Maybe you'd like to speak with Lapinette." Lapinette shook her head violently and took back her edged weapon. "No," said the phone. The Wabbit shrugged and offered the handset all around - without success. He placed his mouth close to the phone, covered it with a paw and whispered. "No-one wants to speak to you." "Good," said the phone. The line went dead and the Wabbit replaced the handset. "The telephones are working at least," sighed Lapinette. The Wabbit lifted the phone and listened. There was no line. It was completely dead. "Whoever that was, they shot through." The Wabbit took Lapinette's knife, grasped the phone cord and smiled. "Noooo!" shrieked the phone. "Just checking the line," said the Wabbit.
[term: "shoot through": An Australian expression for leave or get out, usually without warning.]
at April 28, 2017