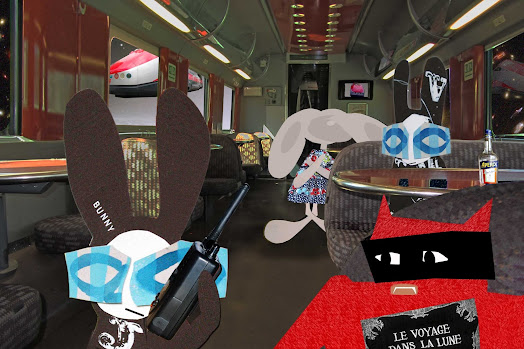 The Wabbit gritted his 28 teeth and called again. "Unidentified craft, respond." Lapinette knew he'd keep trying and gave her attention to the monitor. The craft looked just like them - but there was something not quite right. "Quantum, any ideas?" Quantum's voice boomed from the speakers. "It looks like Unit One." Everyone turned. "It's the motor unit from the other end of this train," said Quantum. Even Wabsworth was astonished. "I didn't think there was one." "Unit One was due for dismantling long ago," said Quantum. Now the Wabbit's voice was urgent. "Calling Unit One. Respond." The craft responded. "This is Commander Wabbit. Stand down immediately. Disengage your weapons." "But I am the Wabbit," said the Wabbit. The pause was interminable. "This is the Wabbit," said the radio. "Disengage or we will fire." Skratch crouched and signalled to the Wabbit. "We're caught in a sci-fi trope. The craft and personnel are our opposites." "An anti-Quantum?" suggested Lapinette. Now the Wabbit's voice lilted suggestively into his radio. "Unit One, you have an urgent appointment at the far side of the Universe." "Appointment?" said the craft. "An urgently urgent appointment," replied the Wabbit hypnotically. "They're waiting for you. You must go. Leave now and you'll just have time to be fashionably late." Unit One started to pull away and the radio crackled. "Stay where you are. We'll be back." "No rush," grinned the Wabbit, "we'll break open the liquor cabinets ..."
at November 14, 2016