2. The Wabbit and the Fourth Kind 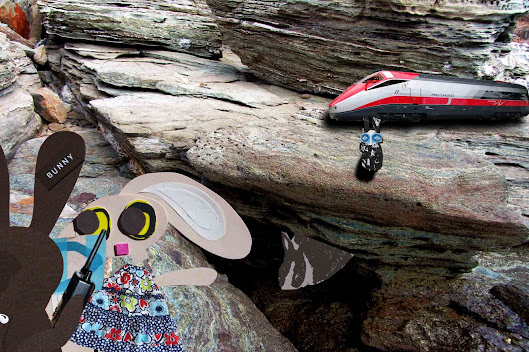 It had the outer appearance of Earth's moon, but that was the end of any resemblance. The planetoid was ruggedly shelved and it took a while to land. Terrain was difficult. Gravity was grim. Lapinette and the Wabbit scouted the territory but it needed agility and a lot of effort. "It's a good thing we can hop," said Lapinette. "We hop, therefore we are," panted the Wabbit. Lapinette's ears shook as the ground trembled. The radio crackled angrily and Wabsworth's tone was urgent. "Reading seismic activity." The Wabbit focused his special glasses. "I can see whiskers," he murmured, "giant whiskers." "And I heard scrabbling," said Lapinette. The Wabbit guessed things were serious. "What kind of scrabbling?" Lapinette hissed softly. "Scrabbling of the Fourth Kind." "Oooh, supernatural," breathed the Wabbit.  A chattering dislodged a few rocks. Wabsworth hopped away from the precipice. A series of scratching noises reverberated in the cavern - edgier than Morse Code. Wabsworth's radio burst into life. "I was expecting you," cooed a voice. In the distance, he saw the Wabbit's paw make a circular motion that suggested time wasting. "Caller, please identify yourself. State your name, business and favourite soccer team." More rocks tumbled. "I am Wabakaguya, Goddess." "And the team, if you please," said Wabsworth slowly. "Urawa Red Diamonds," yelled the voice. "Slogan?" continued Wabsworth. "No-one likes us we don't care," shouted the Goddess.
at November 22, 2016