4. The Wabbit gets a Helping Hand 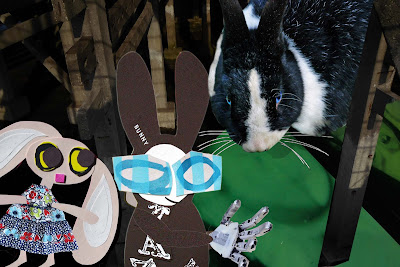 Wabakaguya grasped the Wabbit's paw. An electrical charge coursed through his body. "Good luck, Commander Wabbit," said Wabakaguya, "now everything depends on you." "Everything?" gasped the Wabbit, "That doesn't leave much to go round." His left paw felt strange. "Concentrate on the paw," said Wabakaguya. The Wabbit focused. Tendons tightened then relaxed. "You have a mechanical hand," observed Lapinette. The Wabbit tried to grip his other paw. "Ouch!" he yelled." Lapinette was practical. "What can it do?" "It's a helping hand," said Wabakaguya. The Wabbit moved all of the fingers. Then he waved the hand. A wind blasted round the hall. "Ooooh," said the Wabbit and he tried to take Lapinette's paw. Lapinette snatched her paw away. "Concentrate, Wabbit!" The Wabbit's eyes narrowed. The mechanical hand melded back into the Wabbit's fur and his paw appeared. Wabakaguya smiled. "The hand can engage with the Fifth Force and make adjustments." "Anything else?" asked the Wabbit. "The fingers can sense the properties of any object," replied Wabakaguya. "And the thumb?" asked Lapinette. The Wabbit concentrated and the hand materialised. He waved the thumb and grinned. "We can always hitch a ride." His teeth flashed as he cocked up the thumb and aimed along a pointed forefinger. "Don't you fire that thing in here," said Wabakaguya.
at November 25, 2016