8. The Wabbit and the Force of Venom 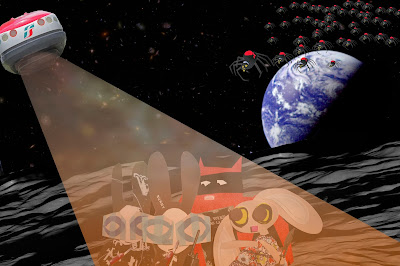 The NiGHT riders passed over them with devastating effect. Both moon and earth began to tilt and they all gripped one another because they were tilting too. "Orders?" asked Lapinette. "Watch," said the Wabbit. Several things happened at once. Quantum's quantum lattice beam sliced across the surface and picked out the team. Designed to be impenetrable, no-one had ever tried it before - so the Wabbit poked it with his knife and the beam formed a shield around the blade. "It works," murmured the Wabbit. "Now what should we do?" asked Skratch. "Nothing," said the Wabbit. Lapinette glanced over her shoulder. Hundreds, maybe thousands of red spiders made spiky silhouettes against the Earth's blue glow. The Wabbit's radio crackled with enigmatic space transmissions. "Device Three status activated." "Payloads primed." Lapinette's ears quivered. "Payloads?" "Arachnid venom," shrugged the Wabbit, "it's been trialled." Wabsworth shuddered and so did Skratch. "What's the delivery system?" asked Lapinette. "Bites on the front," explained the  Wabbit. "Then Duetta's spiders will also bite the sides." "But what does Device Three do?" asked Wabsworth. "It's hush hush," said the Wabbit. "What the binky does that mean, Wabbit?" groaned Skratch. The Wabbit grinned. "It means I have no clue ..."
at November 04, 2016