9. The Wabbit and the Shape of Three 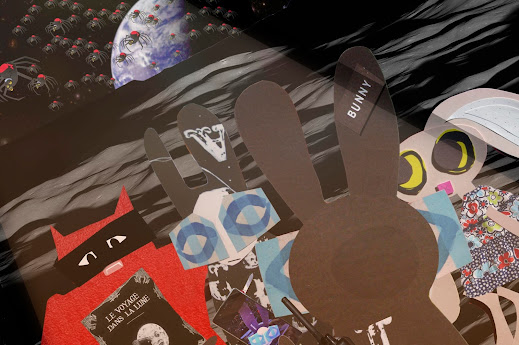 The Wabbit plucked a phone from his fur and attached it to his radio. "This is no time for a selfie," said Lapinette. "There's always time for a selfie," replied the Wabbit and he yelled at the radio until feedback simulated an echo. "Selfie, selfie, selfie," whined the phone. The Wabbit took a roll of duct tape and bound radio and phone together. "This," said the Wabbit, "is the Third device." "I don't understand," sighed Lapinette. The Wabbit wrinkled his nose. "We can't find the Third Device. In Department of Danger terms, that means I already have it." Lapinette suddenly smiled. "Now I get it." The Wabbit threw the makeshift device to Wabsworth. "You stand the most chance of success." Wabsworth also smiled. "Because I'm an android?" Skratch grunted with amusement. "Android must speak unto android?" The Wabbit's voice sharpened. "You're going too." Skratch's purr was low and menacing. "Because I'm a cat?" "Because you're the cat's whiskers," said the Wabbit. "You locate the other two devices. Wabsworth will attach all three together." "What happens next?" asked Wabsworth. "The radio will call the phone," said the Wabbit, "then the phone will answer and take a message. You'll have just enough time to rendezvous with us and Susan." "Just enough time?" echoed Lapinette. The Wabbit's 28 teeth flashed. "Enough time to get the hell out of the way ..."
at November 07, 2016