5. The Wabbit hitch-hikes the Galaxy 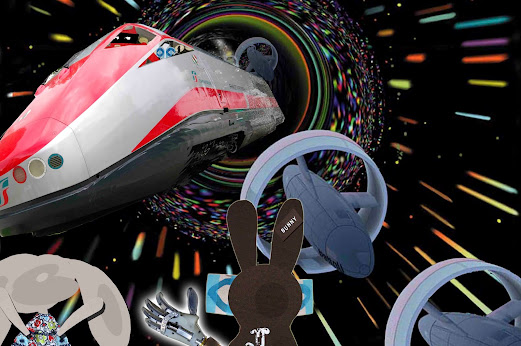 The Wabbit felt in his fur for his walkie talkie - but in his frantic tumble down the slope it had gone. "Nothing else for it," he murmured as he energised his bionic hand. The thumb began to swell up and the Wabbit waved it in the general direction of the universe. With a sudden crack, a multi-coloured portal swirled into view and through it proceeded a caravan train composed entirely of vessels of unknown origin. Lapinette nudged the Wabbit. "I'm not certain I want a lift from one of those things." "Hang on," said the Wabbit. He fiddled with the thumb, stared into the portal and waved. "Here he comes now, right on time." Quantum the Train shot through the portal from the opposite direction, shuddered to a halt and hung in space. Lapinette waved both paws. "Beam us up, Quantum!"  The Wabbit knew what Quantum was saying and mimicked his communications system. "I'm a train, not a Federation Starship. We don't have teleporting technology." But the Wabbit was quite wrong because they both shimmered, vanished and reappeared in Engine Room One. For an instant, small particles of light danced in the space where they'd been. The Wabbit's fur stuck up in all directions. He stroked it back with his bionic hand and shook his head. "That's the way to travel." Lapinette looked around for a mirror. "Does Quantum have a fur drier?"
[The original black hole graphic is from the NASA archives under the licence described here]
at November 28, 2016