11. The Wabbit and the Train Home 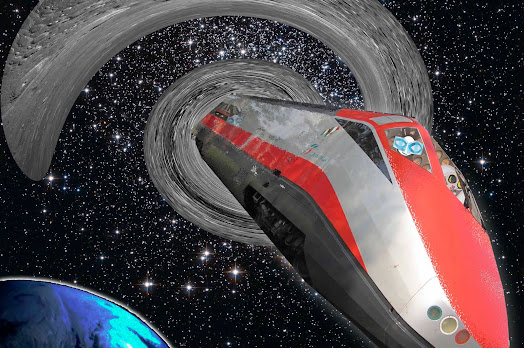 There were several detonations. The polar caps heaved into a spiral and as the moon tilted back, so did Earth. Quantum shot into deep space like a cork from a bottle. "This is the DWA monitoring station," said a radio voice, "If you wish to leave a message, press 1." The Wabbit chortled and pressed all the buttons he could find. "I'm a time travelling train, not a secretary," boomed Quantum. They all shook as he disengaged lattice drive with a thump and, far from anywhere, they hung in space. "What time is it?" asked Lapinette. "The day before yesterday," said Quantum. The Wabbit gazed from the windscreen and murmured. "We have to get back at exactly the time we left." "Like we were never away," breathed Lapinette. Skratch's voice sounded over the speakers. "Do we have to hang around much longer?" "I'm afraid we're behind the times," said the Wabbit, "we have to catch up." Wabsworth chimed in. "This looks like the Sombrero Galaxy." "Oh," said Lapinette. "I do hope we don't meet anyone we know." The Wabbit nodded his head in considered agreement. "Let's move out of here, Quantum." "Look over there!" said Lapinette. "Steady as she goes," warned the Wabbit as Quantum swung round. Lapinette brought the object on screen and gasped. "It looks like another Quantum!" The Wabbit looked closely.  His fur prickled. "It's not another Quantum, it's us!"
at November 11, 2016