5. The Wabbit and the Laughing Wind 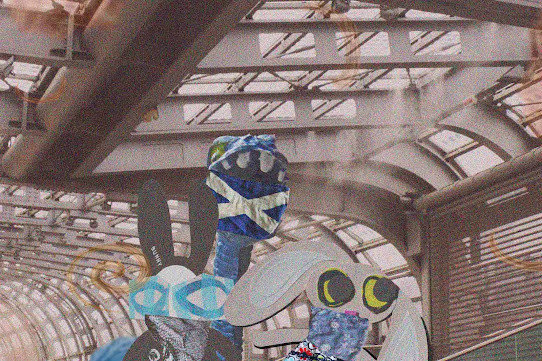 The red speckled dust grew worse and the Wabbit and Lapinette scampered for shelter. Nessie followed close behind and slithered along the station concourse. For a wonderful moment they were free of the dust. Then the vents suddenly opened and dense swathes of red dust filled the building. Dusty spirals burrowed everywhere and whenever they touched glass, they gave out a low sliding laugh. "This isn't funny," coughed the Wabbit.  A spiral slid across his glasses and sniggered. "Laughing ghosts!" bellowed Nessie. Lapinette dodged a feathery spiral as it chortled past. "Wabbit, these must be your ghosts." "Ghosts have no sense of humour," scowled the Wabbit as a spiral crept between his ears. Lapinette stopped. "That's not true. Ghosts play tricks and howl with laughter." The spirals howled and flung red grit at their eyes. "These are daft demons," roared Nessie. Vents chattered and threw more dust. "The Sirocco comes from the Sahara," shouted Lapinette. The Wabbit turned. "They're from the Mountain of Ghosts!" But although the Wabbit had a theory, he was no further forward. One of the spirals exhaled a spray of grit in his face and cackled. The air was unbreathable and as hot as the desert it came from. The Wabbit nudged Lapinette, made an M sign with his paws and gestured down at the rails. Then he put his paws over his scarf and muffled his voice like a station announcer. "All passengers to Level 1 for complimentary biscuits."
at May 06, 2016