8. The Wabbit breaks the Surface 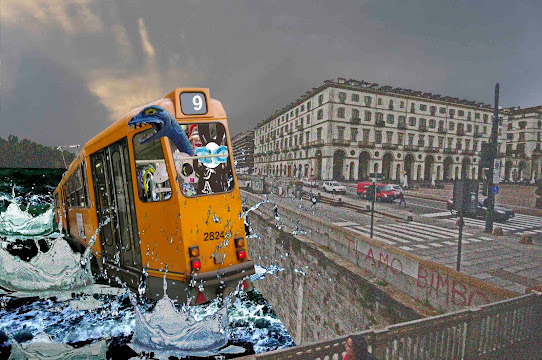 The Wabbit heard ventilators closing and the unmistakable sound of bulkhead flappers. "Brace!" he yelled and he hung onto a rail. Number Nine Tram shot up through the river in a cloud of murky spray. A warm glow from the sky embraced them and Nessie roared in delight. "Wabbit, dae ye aye have so much fun?" The air was still gritty. But there were no ghosts. Lapinette dug the Wabbit in the ribs. "What happened to the Ghosts from the Mountain?" "Mi bad bwai take care of dem duppies. Dem run." said the reggae creature. "Galang chase dem back where dey fra." "Forever?" asked Lapinette. "Trubble no set like rain, Cunie," said the reggae creature. "No badda bawl - im soon come back." The Wabbit had completely forgotten the creatures knew him as Cunie, the African rabbit god. He grinned but had a sudden thought. "What about the Roman Centurion sent to guard us?" "A voice spoke from the back. "Yahso fi real." The Wabbit grinned again. "You're not a Roman Centurion at all, are you?" "No," said the Centurion reluctantly. "I'm a time tourist." "That will cost you 500 euro," shouted Nessie. The Centurion paid up quietly. The reggae creature stared at Lapinette and whistled a low whistle of appreciation. "I-Rey! Im frack look gud." "I didn't quite hear that." said Lapinette primly.
[Bad bwai : Bad Boy.   No badda bawl. : No use crying.   Yahso : right here.   I-Rey! Im frack look gud. : Well hello! Your frock is nice.]
at May 13, 2016