4. The Wabbit and Nessie's Connection 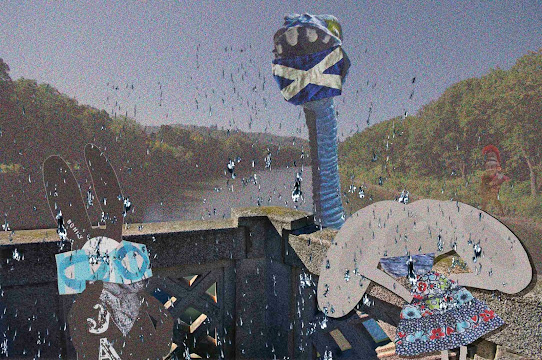 Lapinette suggested the wooded river and they made their way through the red speckled dust. "Something moved in the trees," said the Wabbit. Lapinette narrowed her eyes, stared through the hazy air and sighed. "I think it's a Roman Centurion." The Wabbit shrugged and pulled his scarf over his mouth. At that moment, the river erupted and spray drenched him from head to foot. "Nessie!" yelled the Wabbit. "You're supposed to home in Scotland." "I took a holiday," roared Nessie. The Wabbit was horrified. "What about the elections?" Nessie smiled a jagged tooth smile. "I voted at the Scottish Embassy." A wail from the river bank pierced the wind. "Do you know him?" asked the Wabbit. "I thought the ghost was with you," replied Nessie. Lapinette had a moment of clarity. "He is always with us." The Wabbit found Nessie's spray invigorating and he soaked his scarf and wiped dust from his face. "So he must be our ghost." Nessie bellowed above the wind. "Does everyone get a ghost?" Lapinette spoke primly. "A ghost is a projection of the unconscious, a reality we disown." "No it's not," shouted the Centurion. The Wabbit half smiled but dust went down his throat. "You can always speak to a ghost." "Speak then," said Lapinette. But the ghost spoke first. "I came to guard you," he called. Then he vanished ...
at May 04, 2016