6. The Wabbit in the Late Tunnel 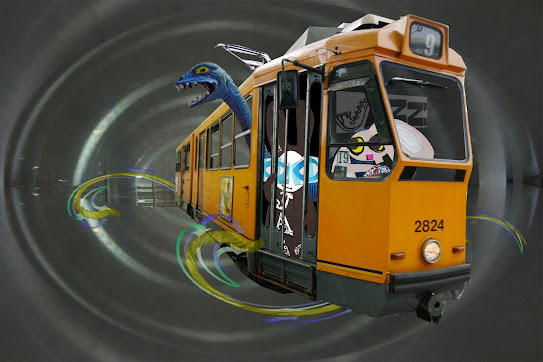 Deep beneath the bowels of the Metro lay the Late Tunnel. Known to a select few, this was where streetcars hid from inspectors, waiting to pop up on the surface ahead of schedule. Number Nine Tram appeared momentarily, scooped the Wabbit, Lapinette and Nessie from a platform and disappeared into the Late Tunnel. Loudspeakers crackled. "Welcome to my schedule," said Nine. "You're late," grinned the Wabbit.  "It's you that's early," said Nine. With a hiss of compressed air a door opened and offbeat rhythms floated through. The Tunnel was populated with Reggae Creatures, who's music gave a whole new meaning to the term "late". They happily surrounded Number Nine and played a classic that was strictly roots. There was no red speckled dust and no laughing tricksters from the Mountain of Ghosts. The Wabbit breathed a clean, clear sigh of relief. "Wabbit, Mi waah know a watta guwaan yasso?" said a reggae creature. The Wabbit shrugged. "The wind brought ghosts and they're out to haunt us." "Bun a fyah on dat!" snorted the creature. "Rassclaat duppies," snorted another. The reggae creatures broke into a strident dub that lasted a considerable time. "Whit are they oan about?" asked Nessie. "They're expressing musical outrage at our ghost predicament," said the Wabbit. "Oh aye," snarled Nessie agreeably. "Togeda we gibe dem trubble."
[Jamaican/Rasta patois. Mi waah know a watta guwaan yasso? :  I want to know what's going on.  Togeda : together
Bun a fya on dat : (abusive) Burn a fire on that!.  Raasclat  : (abusive) toilet paper.. Duppy : dangerous spirit/ghost.]
at May 10, 2016