1. The Wabbit in the Weary Weather 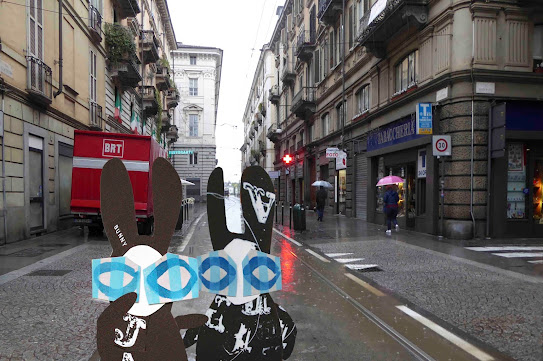 The Wabbit bumped into Wabsworth in the city. He could never recall the name of the street and if asked directions, he didn't know the way. "What's this street called?" asked the Wabbit. "I have no clue," shrugged Wabsworth, "shall I look it up using a powerful application?" The Wabbit shook his head. "I don't think it matters. It's near somewhere else." The rain was slight but it was one of these showers that soaked into the fur. Wabsworth shivered. "We need a change of climate. This makes my bones creak." The Wabbit was perfectly aware that Wabsworth was an android, but had long given up figuring his idiosyncrasies. "Me too," he murmured. "Maybe the weather is better over there." He pointed vaguely into the middle distance. "The weather is usually different in the cinema," said Wabsworth. "Oh, I know what you mean," sighed the Wabbit. On his last cinematic visit, the air conditioning was set so low he'd been forced to borrow an overcoat and socks. He thought affectionately of South Pacific and Fahrenheit 451. "I suppose we could go to the movies," he suggested, "so what's on?" "Frozen," said Wabsworth. The Wabbit scowled. Rain swept down from the Alps bearing more than a touch of frost, and they dived into a caffè.  "What will you have?" asked Wabsworth. The Wabbit's response was swift. "Caffè corretto!" "Make that a double," said Wabsworth.