7. The Wabbit and the Foe in the Grass 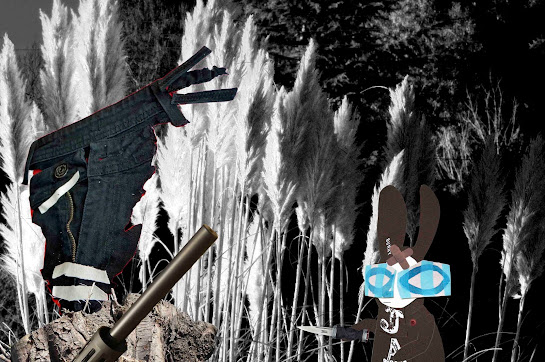 The Wabbit got there first, but he had to think fast. He rummaged deep in his fur for some kind of weapon and at last his paw touched on a knife hilt. It was a ceremonial sgian dubh left over from the Clan MacRabbit annual picnic and the Wabbit thought it might do. He sliced at the grass. The dirk was more than sharp and the Wabbit's 28 teeth lined up for a scowl. "We kin get him down," said the teeth and the Wabbit agreed. He usually did. "It might be better to wait for the team," said an inner voice. "Opportunity," scowled his teeth. The Wabbit inched forward. The Tracker moved forward too and the grass swayed. The Wabbit suddenly lunged and plunged his dirk into the Tracker's back. Nothing happened. The Wabbit's scowl stretched wafer thin. He kicked the figure with stunning force. Nothing moved. The Wabbit shifted round and peered at the figure. It looked frozen solid - so the Wabbit slunk back into the grass. He flicked wood shavings from his dirk and then he shrugged. With lightning speed, the Wabbit lunged at the rifle, grabbed it and rolled. Birds squealed as the gun discharged. The Tracker stooped to retrieve his rifle and he swung and drew a bead on the Wabbit and fired. But there was no Wabbit there. The Tracker looked down at the empty hole in the snow. Then he felt something itchy. The Wabbit's dirk was pricking at his neck. "I'm in charge," said the Wabbit.
at March 14, 2016