9. The Wabbit and the Ethics of Guns 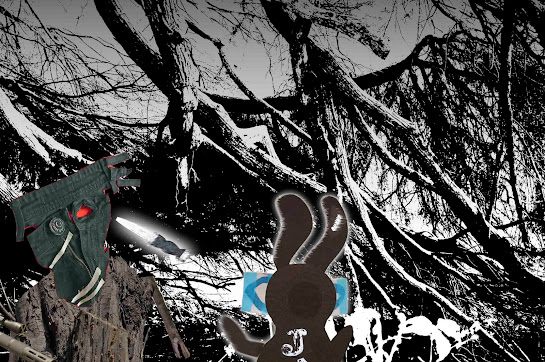 The Wabbit kept talking as he waited. The drop was in and the Wabbit was in charge but for how long? He was aware of his team and he knew they were all close. With sudden action the Wabbit somersaulted and threw his dirk. The Tracker flinched to the right as it shaved past his head. Then he heard the thud as it stuck in a branch above his head. It vibrated with a twanging sound that might have been amusing in other circumstances. Then it fell. There was a faint splat in the snow. "I was hoping for better than that," smiled the Wabbit. Wabsworth's voice called from the woods. "Everything OK, Commander?" The Wabbit called back. "Have you got the chainsaw?" "Right here," lied Wabsworth. The Wabbit stared at the Tracker and spoke to himself. "What the binky am I going to do with you?" Then he shouted. "Stand down or you're kindling!" The Tracker dropped his rifle and his branches sighed. "I was only doing my job." The Wabbit had a moment of clarity. "You're working for the the Agents of Rabit?" "Is that what they're called?" said the Tracker, "I really didn't like them." The Wabbit relaxed. "Not even their mothers like them." He leaned against a tree and spoke through his 28 teeth. "That's an unethical gun." It was the Tracker's turn to relax. "Do you know of an ethical one?"
at March 21, 2016