1. The Wabbit and the Wistful Look 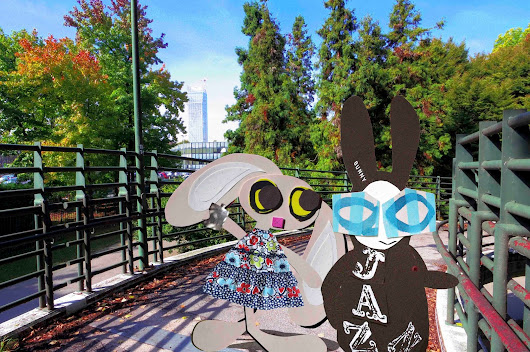 The Wabbit took a short hop and became lost in thought. His shoulder throbbed, Although the anti matter weave in his fur had given him protection, the bullet wound was still sore. The Wabbit felt he should never have taken a bullet at all. He should have paid attention. He should have been more careful. He should have foreseen everything. "Maybe," thought the Wabbit, "I'm getting past it." He ran his paw along the fence. The metal felt pleasantly warm in the sun and he left it there for a moment. Cares dropped away. Time melted. He was aware of something delicious in the air and savoured it. His mind returned to old adventures from the old days. They seemed clearer, simpler, more manageable. "A penny for them, Wabbit!" Lapinette hopped up the ramp and placed a paw on his. "I was thinking," murmured the Wabbit. It seemed to Lapinette that the Wabbit was always thinking, but his wistful look was unusual. The Wabbit turned and hugged Lapinette so hard he hurt his shoulder, but he tried not to show it. "Do you ever think of our old adventures?" he asked. Lapinette looked in her frock for her emergency whisky flask. "No. Too many new ones." The Wabbit smiled. "I was thinking I lost my edge." Lapinette found the flask and opened it. "You're as sharp as ever. Maybe you need a vacation?" The Wabbit thought of all the vacations he'd tried to take and suddenly grinned. "Do I have enough ammo?"
at March 29, 2016