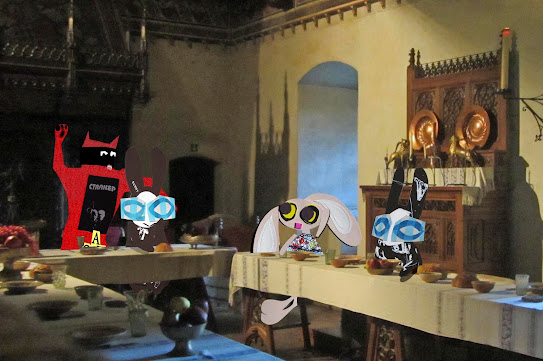 The team assembled at the Safe House, glad of the warmth that wafted from the kitchen. The Wabbit rested his chin on a paw and smiled. Skratch thought he looked sad and threw a paw across his shoulder. "Now Wabbit, what was that for a kind of Adventure?" Lapinette raised her paw and asked a different question. "What did you do with the Tracker?" The Wabbit managed a shrug. "Nothing," he said, "he will henceforth be known as our Agent Three." Lapinette effected an extremely quizzical look and waited. "He's now my main tree in the forest," explained the Wabbit.  Lapinette sighed and pouted. "You're a very sinister Wabbit." Wabsworth wasn't satisfied with this at all. "But this was a very different kind of adventure." Skratch chuckled and patted the Wabbit's shoulder. "Ouch," said the Wabbit. "Sorry Wabbit," said Skratch, I though it had healed." "Oh, it was only a fur wound," smiled the Wabbit. Skratch raised his paw and launched his explanation. "It was an ambush adventure, a genre that ambushes other narratives like a thief in the night." Wabsworth looked at Skratch. "You're right," he said, "it was different. We didn't see the Tracker for a long time. He had to be drawn out and be ambushed instead." "Who tracks the Tracker?" nodded Lapinette sagely. She turned and gave Skratch a compelling look. "I didn't know you were following me until the last minute." "I'm a cat," shrugged Skratch.
at March 23, 2016