5. The Wabbit and the Rail Conductor 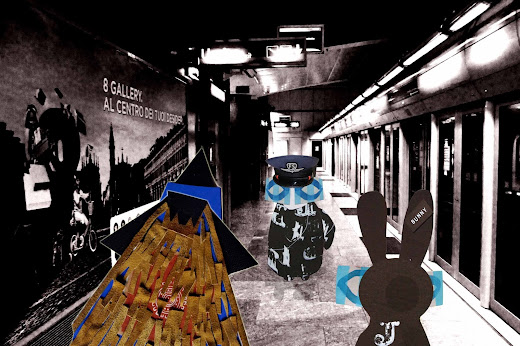 "Attention passengers! Attention passengers!" Wabsworth strode along the platform with all the authority of a rabbit with an official hat. "We're getting that power back for you now." The Wabbit smiled to himself. "What happened, Conductor?" "Nothing much," said Wabsworth. "The train in front of the train in the middle caused an overload on the train at the back." Will we be long?" asked the Shaman. "Indefinite I'm afraid," said Wabsworth. "But whatever you do, don't leave the train." "We're not on the train," said the Shaman. "The train must have left you then," scowled Wabsworth, "but perhaps I can offer you a light refreshment while you wait?" The Shaman showed the first signs of amiability. "I'll have an aperitiv ..." He changed his mind with lightning speed. "Ayahuasca Bitters." Wabsworth turned to the Wabbit. "And you, Sir?" "Ginger and Carrot Cocktail," replied the Wabbit. "I'll fix them now," said Wabsworth. "Wait here, passengers. But whatever you do - don't get on the first train." "Why?" asked the Shaman. "Because it's late," said Wabsworth. "The train you require is the train that follows - that's the Antimatter Flier, change at Lepton for Quantum Spin." "Quantum Spin?" queried the Shaman. The Wabbit grinned. "It's the site of the Large Shed Collider!" Now the Shaman became impatient. "Conductor. The Antimatter Flier. How long?" "Oh, it's about 70 metres," shrugged Wabsworth.
[Ayahuasca: Amazonian psychoactive brew consumed for revelatory and divinitory purposes.]
at June 19, 2015